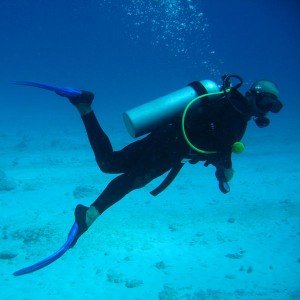 A Scuba Diver: Image by Soljaguar

There is little doubt that scuba diving off the pristine coast of South Africa is an extreme privilege, and that anyone lucky enough to be afforded the opportunity should grab it with both hands. It should borne in mind, however, that the ocean is unforgiving of even slight errors: this is to say that diving (either free diving, snorkelling or scuba diving) requires training and the implementation of safety measures.

In a fact that should be as blinding as a sudden flash from a LED floodlight, the human race has a deeper knowledge of space and the celestial bodies than it has of the planet we inhabit. This is to say that 70% of the earth’s surface lies below the deep blue of the oceans and seas, a fact which has earned the earth the nickname, the “blue planet”. Astoundingly, only 5% of the vast ocean floor has been properly explored.

The pity, for us, is that we miss out on the beauty and richness of underwater life. Imagine, for example, diving below a canopy formed by a forest of giant kelp off the Western Cape coast. Imagine taking in the variety of aquatic life that exists in virtue of the sensitive ecosystem developed around the kelp forests. If the deep, cool waters of the Cape aren’t your cup of tea, however, South Africa’s 3000km of shoreline will nonetheless provide you with a spot containing all that you could want from a diving experience. If warm waters are your “bag”, then consider checking out the hotels in Durban as the city is well situated on the coast, and with just a little travelling you’ll be enjoying the proffers of the Indian Ocean. Of course, if the cold waters appeal to you, there are many cheap hotels in Cape Town for you to enjoy.

One of the country’s favourite and most well-known dive spots is found just off of the town of Umkomaas in KwaZulu Natal. Identified by diving pioneer Jacques Cousteau as one of the top ten dive spots on the planet, the Aliwal Shoal is brilliantly rich in colour and in life, and, conveniently, the shoal is found in the warm Mozambican current. Indeed, the entire North Coast of South Africa is renowned for its comfortable, warm temperatures, the bright underwater luminance in shallower waters, and the crystal clarity of those waters. Areas like Kosi Bay are especially beautiful and attractive to divers owing to the conservation of naturally occurring ecological systems.

If scuba diving is something that has appealed to you, the matter is probably worth investigating further. There are some fundamentals that can be outlined on this site, but real knowledge in diving comes mainly from experience. It is thus imperative to begin your journey by conversing with experienced divers who can point you in the right direction.

“Scuba” is an acronym that has an interesting history and is derived from the phrase, “self-contained underwater breathing apparatus”. Correctly understood, scuba diving is a type of diving that uses an oxygen supply carried by the diver him/herself. This can be opposed to free diving (where no underwater air supply is provided at all), snorkelling (where a pipe supplies surface air to a diver), and surface supply diving (where a diver is supplied with air underwater from a surface vessel). Scuba tanks allow the diver to remain submerged for long periods of time, and further free the diver from a connection to a surface vessel.

There are diving opportunities in lakes, dams and rivers (that is, fresh water bodies), but the vast majority of scuba diving takes place in an ocean or sea.

The majority of scuba divers are sport and leisure divers, which means that they dive purely for recreational purposes. There are those few, however, who have been lucky enough to turn diving into a career. Professional divers often start diving at an early age, and are essentially employed for scientific, military, industrial, engineering and commercial purposes.