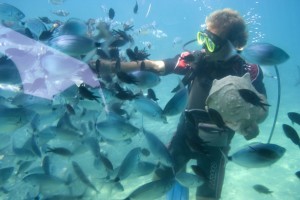 diving in a controlled environment

Whereas there are many various ways to unwind, relax, and de-stress from the pressures of work, traffic and city life, scuba diving remains one of the most popular recreational activities available today. Given the choice between the opportunity to buy a tablet PC for entertainment purposes – or even a new set of LG electronics for your home theatre system – or a chance to explore the deep blue, there can be little doubt that few amongst the healthy and able bodied would choose the former.

The history of self-contained underwater breathing apparatus diving begins, more or less, with the emergence of the “frog men” of WWII. After the War, Jacques Cousteau continued to refine the design of the aqualung to perfect the delivery of oxygen to the diver and to perfect the mixture and pressure of the gases contained in the tank.

Breathing under increased pressure is a critical factor in diving, and incorrect handling of the problem can have dire consequences. Whereas symptoms like joint pains and headaches point towards decompression sickness (the bends), these symptoms can vary in severity and include nausea, loss of consciousness, and even death. Given the fact that there are technical considerations when diving, it is always advised that novice divers receive as much training from experienced individuals as is possible. Moreover, for the protection of divers themselves, rules and guidelines have been clearly laid out to prevent injury and death.

Novice scuba divers are warned not to dive below a depth of 6m. This rule owes to the fact that at increased depth there are greater compressive forces placed on divers’ bodies. Inappropriate surfacing (which means fast decompression) often results in bubbles of gas forming inside tissue and the bloodstream. As experience increases, the durations and depths of dives are allowed to increase. Qualified instructors teach beginner divers techniques that instantiate proper surfacing diving practices. When well-practiced and well taught, a recreational scuba diver can achieve depths of more than 40m (the equivalent of 12 storeys).

Depths like those mentioned above are definitely not for novice divers, and it is rare that they will ever be required. Typical recreational diving takes place on reefs, shoals, around atolls, etc. where the water is relatively shallow. Extreme depths occur only beyond the continental shelf, and specialised equipment is required by those who are trained to engage in deep and technical diving exercises. Don’t be fooled by the restrictions though, there is an immense amount of truly brilliant diving to be done up to a depth of 11m below surface level: most reefs are less than this depth and the first few meters of water support a huge variety of underwater plants and various other life forms.